There are moments in your life that are seared in your recollection. Even though some of the finer details may fade with time, your heart is permanently branded with the memory. This is the story of one of those encounters.

In early 2003, my husband, Matt, underwent a stem cell transplant to eradicate the mutant white blood cells coursing through his veins. AKA – leukemia. For those who are blissfully unaware of the process, let me give provide you with a brief timeline: 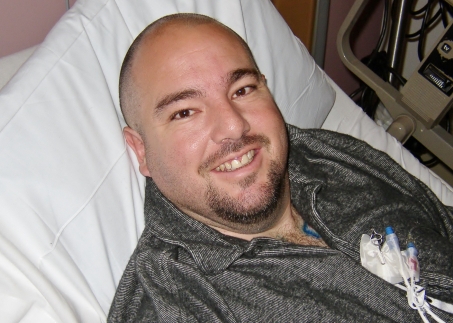 Matt – One of his first days in the hospital

During Matt’s entire hospital stay, he was never left alone. I would arrive each morning by 6:30 to catch his doctor on his early rounds. One or both of his parents would come each evening to relieve me and spend the night. The nurses at his facility were some of the best in their field, but with an entire ward of critical patients, they were stretched thin. Our devoted trio strove to pick up some of the slack. There was always someone there to hold Matt’s hand, fetch the vomit bucket, or help him to the bathroom.

The days in isolation were some of the darkest. The patient feels like they are dying (quite frankly, they are) and, at their lowest point, begs you to let them. All traces of their original bone marrow – the production locale of blood cells – have been annihilated. This grueling prep must be completed in order for the donor stem cells to seize control.

It’s the medical equivalent of a hostile takeover.

Blood cell counts are done repeatedly to gauge progress. White blood cell (WBC) counts for healthy individuals typically run from 5,000-10,000. A stem cell transplant patient begins isolation with WBCs in the single digits. Waiting for the new cells to take root and multiply is like trying to make an industrial vat boil using only a birthday candle. Slow and tedious, you are constantly worried the candle might burn itself out before the water even reaches a simmer.

Previously, I would quickly grab a light lunch to eat back in Matt’s room. Outside food, however, was not allowed in the isolation wards. Stubbornly glued to Matt’s bedside during this perilous phase, I was skipping nearly every meal. When this absence of nourishment was combined with my lack of sleep and constant worry, I was in danger of needing my own hospital bed.

Whenever you spend any length of time in a medical facility, it doesn’t take long to know much of the nursing staff on a first-name basis. Most of them will take care of your loved one up to a week at a stretch. There are a few, however, that only appear for a day or two. These fleeting engagements can prevent you from ever learning the names of these particular providers of mercy. Such is the case of the nurse with kind eyes.

She came in one morning, introduced herself (again, can’t recall her name), and tended to Matt. She popped back in each hour just like every other nurse had been doing for the past week. After about hour five, she asked if I was going to lunch. “No,” I replied, “I’m afraid to leave.” The nurse look a little concerned, but nodded as she left. I had been asked that question many a time and thought nothing of it.

An hour or so later, she returned, a small paperback book in her hands. “Go eat. You need your strength,” she instructed. “I’m taking my lunch in here.”

She was of Asian descent and her gaze was sympathetic. Beyond that, I am unable to recall her appearance. Nevertheless, I will never forget the effect she had upon me. My mind had been hissing with incessant anxiety. In the short amount of time it took to reach the cafeteria, I was able to settle my fears down to a steady purr. The kind-eyed nurse took on my “burden” for less than an hour, just long enough to rejuvenate my stamina for the weeks and months that lied ahead. Her act of compassion still resonates more than a decade later.

This essay is the second installment in my Bucket List of Gratitude. Check out my inaugural piece to learn more about my goal to recognize the not-so-random acts of kindness that have impacted my life.

6 thoughts on “The Nurse With Kind Eyes”

Lisa Gastaldo is a Creative Writer based in California. Her essays and poems, which cover everything from raising her two sons, losing her husband to leukemia, battling cancer and autoimmune disease, reentering the dating world in her 50s, as well as memories of life growing up a Valley Girl in the suburbs of LA, have appeared on Medium.com, The Good Men Project, and The Huffington Post. You can keep up with her on Twitter @ciaoluvlisa.